Episode 59: The Rebrandening with Joe Castro and Steven Escobar 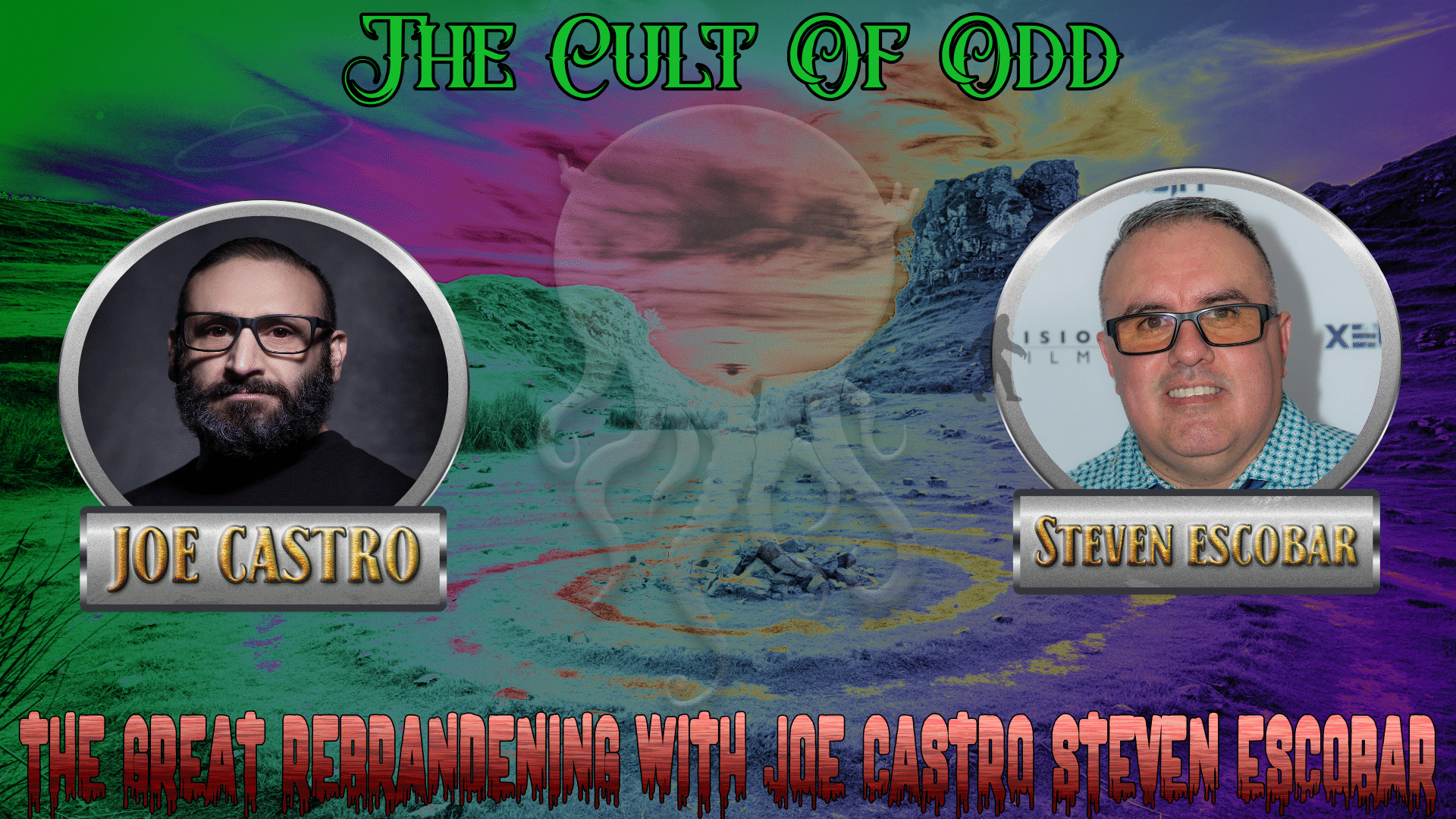 Welcome to the great rebrandening, that’s not a word…or at least it wasn’t until now! Zeitgeist Baby! Anyways, We are The Cult Of Odd and we’re here to bring you love and joy and make you go…wtf did they just say?
It’s The Odd Podd evolved…devolved…revolved…some sort of volved happened and here we are.
This first episode of the Cult Of Odd brings with it a great round of Interview Roulette, we got dual guests and that mean twice the answers! Who says you can’t get more for less?
——————————————————————————————————————————————————————————————————————-
Joe Castro Director, Producer, and Special Effects Artist, Joe Castro, born in San Antonio, Texas, began his career at age 15 when he was hired to create special effects make-up for a PBS affiliate and graduated to writing and directing his own feature films, in the 80’s, when his parents invested in his career and bought him a portable VHS camera.
In 1985, Joe won the National special effects make-up contest in Monsterland magazine. In 1989, Joe moved to Los Angeles, California to continue his career in filmmaking.
In 1993, Joe produced and directed his first feature film, CEREMONY, shot on 35mm Panavision. The film was an apocalyptic horror thriller. This film won a Silver Award at the Worldfest Charleston Film Festival. In 1997, Joe produced his second Internationally distributed feature film, Legend of the Chupacabra on his parent’s ranch.
In 2001, Joe produced, directed, and created the special effects for the wildly, successful cult film, TERROR TOONS. This film has already spawned four sequels.
Steven Escobar Born and raised in Edinburg, Texas. He finished his education by graduating from The University of Texas – Pan American with a Bachelor of Arts in Communications with concentration in Radio/Television/Film.
In 1992, Steven began Associate Producing the musical variety show, Budweiser’s Dance Time in Texas which ran for 2 years as a syndicated television series. He went on to co-create the successful music series titled, Tejano Country.
In 1996, Abraham Quintanilla (Q Productions, Inc.) contacted Steven to produce Latin music videos by such artists as Selena, Pete Astudillo, and Jennifer Pena. This lead to his involvement on the Warner Bros. Film, “Selena”.
Steven works as a picture editor on various reality shows which range from Fox’s Trading Spouses and Nanny 911 to NBC’s The Apprentice and The Apprentice: Martha Stewart.
In 2007, Steven won a Primetime Emmy Award for “Outstanding Picture Editing for Reality Programming” for The Amazing Race.
Both Joe and Steve are good friends of Odd’s and they always have a great conversation. You should really check out both of their bodies of work.
We talk about Snow Removal Apps, Robot Girlfriends, Models that Drink Urine, Squirrel attacks, Aliens and more.
Music By: Snatch The Snail, The Chinchillionaires, Malota,
Theme Song By The Chinchillionaires & Oddio Productions
LINKS
Joe Castro https://www.joecastrofx.com/
Steven Escobar https://www.imdb.com/name/nm1194439/bio
Snatch The Snail https://www.snatchthesnail.com/
The Chinchillionaires https://thechinchillionaires.bandcamp.com/
Malota https://godownrecords.bandcamp.com/album/the-uninvited-guest-ep
Cult Of Odd Patreon https://www.patreon.com/cultofodd
Cult Of Odd Merch https://www.littleshopofoddities.myspreadshop.com
Cult Of Odd Website http://www.thecultofodd.com
Cult Of Odd Socials https://linktr.ee/cultofodd
Please follow and like us: