Why I Hate Star Wars! 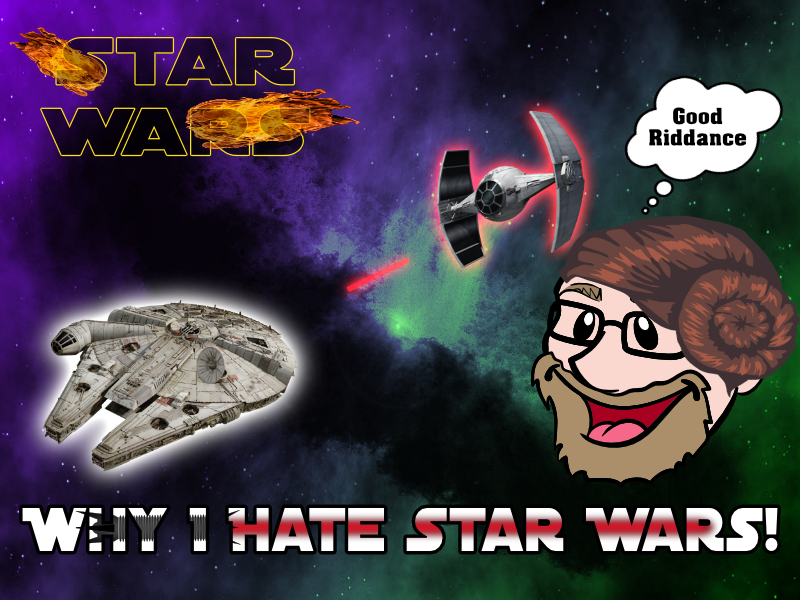 Star Wars rocketed out of the late 70’s and became a cultural phenomenon. Nothing like it had been seen before, the story, the effects and the marketing set a tone that the film industry still follows to this day. Releasing toys, supplemental material (such as books, comics and now tv shows), and every imaginable product under the Tatooine two suns!

The title is only half click bait. I enjoy the movies, tv shows and animated shows. I think the merchandise goes a bit far, I mean look at the above picture for proof of that. Anything that produces as much plastic waste as Star Wars is less than admirable in my book. I get the fandom wants keep sakes, but at what point does one say enough is enough?

No what I hate, and I’ll even back it down and say strongly dislike. What I dislike is the fan base, the product itself has some issues (stop rereleasing it every 4 years!). No the rabid fan base and their obnoxious gate keeping style about them. I am always careful to say I am not a fan, I just really enjoy Star Wars and the universe it established. There are truly some great stories and some real badass Star Wars characters and creatures.

Star Wars fans tend to be some of the worst fans out there. Don’t you dare misspeak a name or forget the particular obscure region a character hails from. If you do, you will be hearing “ummm actually” hissed at you from every angle. I have been the victim of the gate keeping. As I stated, I enjoy Star Wars but I am not a die heard fan. I watch to enjoy the story and I know this will be shocking to some…but I get things wrong occasionally. So not know that X is from the Y region of Z space, it’s just not that important to me to retain all those intricate and seeming inconsequential details.

I’ll never understand why a lot of Star Wars fans are so rabid when it comes to these details. It’s like they have a vested (financial) interest in the property. Like, if I don’t know the name of the little hopping creatures on Luke’s isolation island, I am somehow ruining the entire franchise in one go. Or if I am ok with the midichlorian explanation for Anakin’s power, that I have just spit in the face of every fan ever.

Star Wars has an expansive list of characters, ever growing with each new installment of the franchise. From R2D2 to BB8, the droids tend to be the scene stealers and they don’t even have lines! Then you have the universally hated Jar Jar Binks, personally I didn’t REALLY mind him at all. He was a bit of comic relief in a pretty intense movie. I didn’t at the time, understand how the affable goof became a senator. Then again look at our real life senators. My only real complaint about a character is with Yoda, I want to know what the hell his race is so we can stop referring to him and Grogu as “Yodas”. It’s said that George Lucas has written what their race is, but refuses to say because he wants to keep it a mystery. Nancy Drew that shit people, we need to know what race Yoda, Yaddle and Grogu are!

Star Wars : What Do You Call A Series With 9 Movies?

3) A lack of imagination to write anything else

4) A trilogy of trilogies

Whatever you call it, there is no denying that Star Wars is a power house of content. Though it seems most fans would like to forget the third trilogy doesn’t exist. I see people online actively calling for the Disney+ series The Mandalorian to retcon/rewrite history to wipe clean the slate. The biggest issue seems to be with the “woke” nature of the last 3 movies. That it focused too much on a female lead, removing the men from the story as a focal point. I guess it’s okay to have strong female characters like Padmé Amidala and Princess Leia, just as long as they don’t get too much screen time or draw attention away from the men. DUMB!

For a movie called Star Wars, there seems to be more geopolitical infighting than actual stars fighting. It makes matters worse when you realize that the Jedi are the true enemy of the story. The Jedi are trying to impose religious will upon an entire galaxy. They abduct babies, they seclude them away and raise them devoid of emotion and relationships. Why do you ask? All to fight in a holy war against the established order of things. Speaking as someone who is staunchly against religion imposing it’s will upon the populace, I simply can’t see the Jedi as the heroes of these stories. Sure the Galactic Empire is the space fairing equivalent of Walmart and Amazon combined, but at least they aren’t being driven by a religious superiority claiming theirs is the one true way. It’s driven by greed and the hunger for power, you know like every red blooded American corporation!

I don’t actually hate Star Wars, I enjoy the movies and talking with friends who are fans. When I have questions about stuff, the folks who have absorbed Lucas’ essence into the fabric of their being are the first ones I go to. I’ll watch the movies, I’ll check out the tv shows and I’ll even seek out comic/book summaries online. If I see or hear something that doesn’t make sense or conflicts with previous understanding, I just chalk it up to the Jedi’s religious persecution of anything that goes against their grain. I don’t trust those Jedi, not one single bit. These are not the heroes you’re looking for! However, maybe…Just maybe this whole post for content purposes and I don’t actually think any of this.

Until the next Odd Thought!

One thought on “Why I Hate Star Wars!”